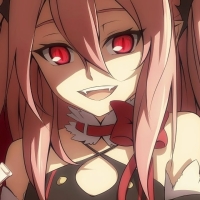 My One Piece loving Grimms,

I’m back with another review. I’ve honestly been binging pretty hard lately with this show. I’m probably going to have to take a break soon just so I can mix it up with a different show.

Just a reminder this post is written with the mindset that anyone reading has watched season one and two. If you have never watched One Piece please start with my post One Piece Season One: Let the Journey Begin.

There will not be spoilers for season three but season one and two are fair game!

Luffy is a pirate bent on finding the One Piece and becoming the King of Pirates. To do this he assembles a crew in order to enter the Grand Line. As of now he has Zorro, Nami, Sanji, Usopp, Chopper, and Robin.

So far they have engaged in some pretty sweet adventures. All the while increasing their bounties in Luffy and Zorro’s case and becoming a major pain in the marines side. 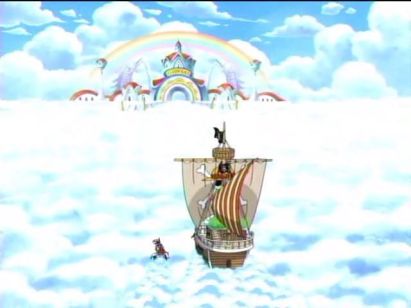 Season three centers around the Straw Hats trying to make it to an island in the sky. Rumors swirl around about its existence and the crew is determined to find out if it’s true.

Once there what seems like an idyllic heaven turns out to be anything but. Hidden under the surface of perfection it turns out that the Angel Island people live in fear of a wrathful “God” and his cronies.

On top of that they seem to be at constant war with a group of people called The Shandians who just want their homeland back. Sadly the Angel Island people are convinced it is holy land.

All Luffy and crew wanted was too explore some new places and find some gold for their ever empty pockets. Which we can probably blame on Luffy’s eating habits.

I really enjoyed this season! I’m not sure what it was about this season but I laughed alot! Like full on out loud laughter. Everyone was at their humor pinnacle. 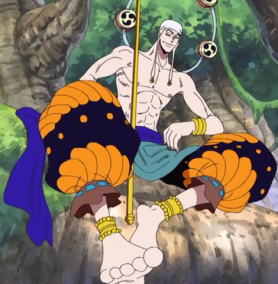 This season wasn’t without it’s serious moments though either. I loved how this season connected so many aspects together. This has been my favorite season so far. It had a great balance between humor and serious, the storyline really kept me engaged the whole time, and the villains were perfection. Especially Eneru the Island God who also had a great voice actor in Toshiyuki Morikawa.

All in all a truly enjoyable watch!

What the heck! What happened to Ace? He shows up literally for two minutes this season and it’s never followed up on! I can only hope this is brought up again during the next season. Wah! I love when Ace is around. 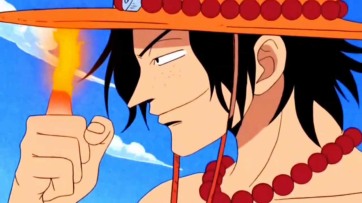 Also zero appearances by Smoker this time around. I miss him as well. I really want a rematch between him and Luffy. I want to see how Luffy manages to deal with that smoke!

This season also mentions the need to replace Crocodile now that he’s on the outs but a replacement isn’t actually named. There is someone hoping to gain their shot at it by taking down Luffy but they haven’t really followed up with this. I wonder if we’ll see more of this next season.

We also have Robin’s obsession with the poneglyph. I’m still not even 100% sure what this thing does so I’d like to learn more in the next season. Is it somehow connected to the One Piece?

Also I’d like to know more about Luffy and Ace’s background. I mean who are their parents? Where did they grow up? When did Ace become a pirate and why didn’t Luffy go with him? I mean Luffy literally just shows up randomly on a raft in the beginning.

As you can see with all of these questions it’s not that strange that I’d be obsessed with watching this lately. I want answers!

On that note it’s time to start season four. Hopefully some of these questions will be answered. In the meantime comment below with your One Piece thoughts, but please remember to avoid spoilers or let everyone know you are discussing a spoiler just in case they want to avoid reading it.

Also don’t forget to support GrimmGirl by checking out my Patreon. You can help me out by either subscribing or by sharing it ❤ Both are appreciated!

I do not own these images

One thought on “One Piece Season Three: Island in the Sky”