Hey guys! I swear to you I will be picking up with my reviews of Sailor Moon soon! I have just been obsessing over Fruits Basket lately and I can’t seem to put the series down! It’s been a while since I last read these books and I feel like I’m falling in love all over again.

As a reminder while this post will be free of spoilers concerning volume 3 of Fruits Basket I will be discussing spoilers for volume 2. If you are unfamiliar with this series and want to get a feel for if you think you would be interested in reading this manga I highly suggest you check out my Fruits Basket Revisited: Volume One review! Otherwise feel free to read again.

Before I get into volume 3 of Fruits Basket I feel like I need to recap on volume 2. I love volume 2 because it introduces Hatori and he is one of my favorite characters within this series. Hatori’s introduction is important to the plotline because it is through him we are able to get an even better grasp on Akito’s personality.

We learn that Hatori once loved someone very much but it ended on a devastating note. When he decided that he wished to marry this girl and told Akito, Akito flew into a rage and cut Hatori’s eye. He shouted at the girl claiming that if Hatori went blind it would be all of her fault. He also mentioned that he would never allow Hatori to go to a girl that couldn’t even break the curse.

Hatori tried to explain to the girl it wasn’t her fault, what happened to his eye but it was to late. She was convinced it was her fault and the self loathing that followed began to eat away at her until one day Akito suggested to Hatori that if he truly cared about this woman he would suppress her memories of him in order for her to move on. In the end Hatori unable to bear her suffering any longer does just that.

You would think this whole affair would cause him to harbor anger towards Akito and blame him for everything but it doesn’t. That is the other thing we learned during volume 2. There is something about this curse and bond that the members of the zodiac have with Akito that causes them to be unable to blame Akito for his actions. It also reminded us again that Akito and Shigure are convinced that it is possible for the curse binding them to be broken.

Speaking of their bond knowing all of this it comes as quite a shock when Kyo and Yuki opt out of going to the New Year’s banquet held every year by Akito. Through Hatori’s story you get the sense that going against Akito’s wishes is damn near impossible yet Kyo and Yuki are able to work within their constraints to be there for Tohru. Is this a sign that the bond/curse binding them to the zodiac and Akito is slowly beginning to loosen?

Finally we have to question where Shigure is within all of this. We have yet to learn exactly what his and Akito’s plan is. Are they trying to break the curse? What exactly is their end game? Either way it seems to be between the two of them.

It is with these questions and revelations we begin volume 3. The big thing that you get to look forward to is a new member of the zodiac. We briefly see this character in volume 2 but volume 3 is when we are formally introduced to Hatsuharu Sohma. If I had to rank the characters in Fruits Basket Haru would be at the top of the list. I love his rocker style, two tone hair, and personality (both of them). 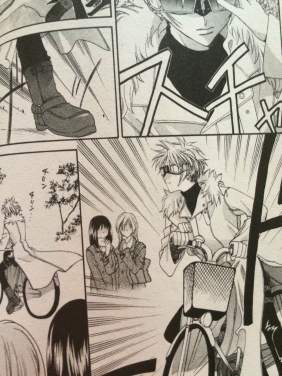 The introduction of Haru’s character is good because it begins to reveal aspects of Yuki’s character. In essence he is the catalyst in understanding how Yuki’s past has effected Yuki and himself. Not only do we meet Haru but Kagura makes an appearance in this volume. Let’s just say that she is her usual pumped self now that Valentine’s Day is here and is all for a double date between herself, Kyo, Tohru, and Yuki.

While Tohru has her hands full on her first date Shigure stirs up trouble with Hatori. It becomes even more clear that he is cooking something up in regards to Tohru and her relationship with the members of the zodiac. You can’t say Shigure without Akito though and through is dialoge with Hatori little by little we gain more insight into his relationship with the zodiac members. It also becomes clear that Shigure does not view Akito in necessarily the same light as the other members of the Sohma family.

This volume ends with Tohru going to a Sohma owned hot spring with Yuki, Kyo, and Momiji. For all you Momiji fans out there don’t fret, you see plenty of him this volume as well! The hot spring adventure gives Tohru the opportunity to learn more about the Sohma family, particularly Yuki.

Good times in the neighborhood with this volume! On top of being introduced to a new character we are slowly gaining better perspective on our old characters. As much as we are learning about the Sohma’s we are also seeing how much of an influence Tohru’s mom is to her character development. While Tohru’s mom may have passed away it is clear that the decisions Tohru makes are still heavily influenced by the advice left by her mom before she passed away.

On top of the story continuing to develop characters I cannot emphasis how much I enjoy the humor in this manga. It is right up my alley. Look forward to Shigure’s face when Momiji explains that he calls their trip to the hot spring, “Mine and Tohru’s Steamy Onsen Heartful Tour”! I laughed way to hard at that part. Not to mention Tohru’s surprise at who the incoming freshman will be or Haru’s nonchalant attitude to Shigure’s general life.

I hope you have been enjoying these reviews on Fruits Basket 😀 Let me know what you think so far in the comments below!