Hello, hello! Sorry it has been so long since my last post. My husband and daughter went down to Louisiana for a little vacation and I of course procrastinated and didn’t have nearly enough posts scheduled to fill the gap. I’m back now though so I thought my first post needed to be for my anime challenge.

This challenge is beastly and I am pretty much staggering through it haha! I’ve been working on this for such a long time it isn’t even funny. On top of that I’m only on day 21 J I have a problem. That being said everyone should check out Pokeninja90’s anime challenge that she started for July because she is crushing it.

How can you not laugh with this guy? I really do not think there is an episode that he hasn’t made me laugh during some point of the show. Pretty much every interaction he has with the characters is gold. Usually I have certain characters I love watching interacting together, for example Naruto and Shikamaru are two of my favorite characters to have on screen together during Naruto and Naruto Shippuden because of how their personalities play off each other. With Tamaki however, I love him with everyone! I can’t choose a favorite.

Watching him with Haruhi and Kyoya is always gold because of how his hyperness just bounces right off them. Also I love that no matter how ridiculous he is neither of them seem capable of not giving into him. You can’t look away when he’s with the twins because the three if them together are insane. The twins are such instigators and waffle between supporting his crazy ideas or adding fuel to the fire. Both of these bring out the greatness of Tamaki’s goofiness.

Even Tamaki with Huny and Mori is perfect! I’m not sure if you all remember this but at one point Huny slams Tamaki’s bear down and I totally lost it laughing. I had to rewind it about twenty times because Tamaki’s face at that moment was so hilarious. That’s another thing, Tamaki’s facial expressions are always on point. The episode when he finally meets Haruhi’s dad? Oh my goodness! I laughed so hard! Or all have weird little daydreams about Haruhi that make absolutely no sense to anyone who has actually met Haruhi. Priceless.

I think what I love best about Tamaki’s goofy character is that he is genuinely a good guy. He really does want to make everyone around him happy. Even though he can be a total goof he can be serious when he needs to be and above all he strives to be a good friend to everyone he encounters. That really makes me love his character ❤

So who’s your favorite goofy character? 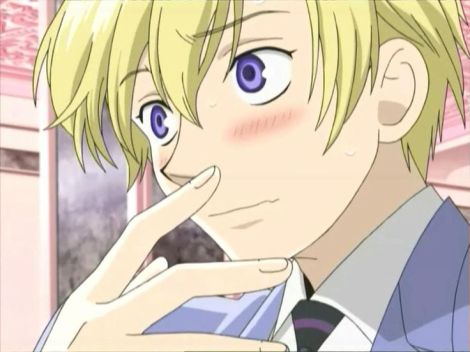