Recently my husband and I adopted a cat from our local Humane Society and the experience really taught me a lot. It also made me realize that with every animal that has joined our rag tag family I have learned more about animal rights and the experiences have shaped me into the person I am today. I thought it would be really fun to go through each of our animal’s stories and share the things it’s taught me.

I think that a lot of times when it comes to animal knowledge some people can be really condescending about it when you’re asking questions (at least that’s how I’ve felt) and it occurred to me I would have learned about more things a lot quicker if I would have had a laid back place to learn about everything. I’m hoping that this series of animal posts can help spark discussions and be that place to ask questions and learn new information.

I am by no means an expert on animal rights and I’m learning new things everyday but I think that’s the really cool thing! I like the fact that I can talk with others and get new ideas on how to help out my furry friends. I also thought it would be cool to hear from all of you on how you found your pets so don’t forget to share your stories in the comment section below.

So without further ado I would like to introduce my wonderful dog… Koga the Wolf Demon! 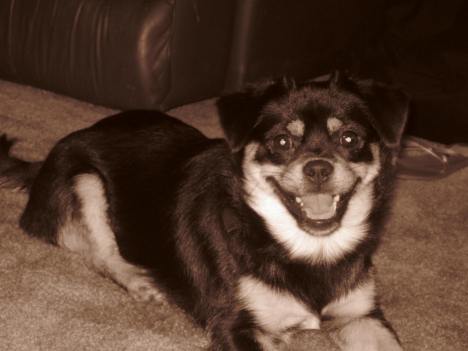 First off can we all just appreciate how awesome his name is? Hahaha I’m an Inuyasha fan if you can’t tell! Now Koga has a really interesting birth story and his joining our family taught me something that I had never really considered before he meandered along. The lesson was simple; purebreds aren’t all they’re cracked up to be.

See the thing about Koga is he’s technically a mutt. To be more specific he is a Japanese Chin Schipperke mix. I am willing to bet that you have never seen another dog like him and probably never will because he was a total oops baby.

Koga’s epic journey into the world all starts seven years ago when Pouf my best friend’s (Missy) sister’s (Angie) dog came to stay at their mom’s house. Basically their mom was dog sitting.

Not only was Pouf certified purebred she was in heat. Angie was pumped because she wanted to find another dog to bred Pouf with and then she could sell the puppies. You can understand the appeal of that plan now that you know how much she could’ve sold the puppies for.

Unfortunately for her (and super lucky for me) her plan didn’t go so smoothly. Instead of getting to mate with another Japanese Chin Pouf got out of the house and found my Missy’s Schipperke, aptly named Romeo instead.

Angie was furious when she found out Pouf was carrying Romeo’s mutt babies and didn’t want anything to do with the puppies. She just wanted to get rid of them and was handing them out to anybody for free. At the time I wasn’t looking to get a dog but when Missy told me about her sister’s free puppies I decided to check them out. I was also living in the dorms so I knew realistically I couldn’t get a dog anyway, but what was the harm in looking? To be honest I was mostly just curious as to what these puppies would look like since they were mixed with such different breeds.

When I saw Koga I feel in love. He was the runt of the litter and at first they thought he was going to die. In fact when he was born he did stop breathing and everything but Missy’s dad kept rubbing him and was able to bring him back to life. I’m a big believer in signs and all of that so I was convinced Koga was meant to be with me. Nobody really wanted him so I told the family I would take him!

I convinced my mom to let him stay at her house (on the condition that I paid for all of his food, accessories, and vet bills) for the rest of my school year and talked my boyfriend (who would be come my future husband) to stop by my mom’s everyday to play with Koga and take him out for walks and stuff. I lived to far away to be able to come home everyday but I made it a point to come home every weekend to spend time with Koga. A few times I even snuck Koga into my dorm! He was so tiny I could just pop him into my purse quick if anyone spotted me on my way to my room.

Koga loved it at my mom’s place. He played with her pit bull/chocolate lab mix, which was hilarious to watch and grew up to be a really healthy dog. The only time he has ever needed to go to the vet was for his routine shots and of course to get neutered. His days of being a runt are far behind him.

I compare his personality to a grumpy old man/cat dog. He can be pretty active but he also enjoys his alone time. His favorite thing to do is to sunbathe in the window and people watch. He can also get grumps with people if you try to rough house with him like people do with some dogs. He is not about that life. He can also be an incredible cuddle bug though. Although I will admit this is mostly with me.

This brings me to my original point; purebred dogs aren’t all that they’re cracked up to be. You see to me Koga is one of the greatest dogs ever. It’s crazy to me that he would be considered of lesser value just because who his parents are.

He’s amazing and worth just as much to be as high priced dog. This line of questioning lead me into my first foray of learning more about animal rights. Fast forward a year and half later when my husband and I were buying his dog a pure bred dachshund, I wondered what was the big deal with purebred dogs? Why were they so expensive? Were they really better than Koga because of their genes?

After researching it I quickly found out the answer was no, in fact genetically speaking Koga is much better off than his purebred counterparts. Thanks to his parents he had a wider gene pool to chose from when being created which lessened his chances of getting any diseases or defects that carried down through the purebred lines of his parents.

Below is a video that takes a humorous look at the downside of purebred dogs and I thought you all might get a good laugh out of it… I know I did!

To sum it up the downside of purebred dogs is the propensity for health problems. Purebred dogs are human created. We create them by breeding them down in order to get certain traits (physical or personality) that we desire. In order to do that we have a pretty limited line of dogs available to us and what ends up happening is the chances of bad genetic traits passing down gets higher and higher. For example check out the delightful royal families from history past. You keep marrying your cousins and siblings and bad genetic traits are bound to start popping up more frequently!

Basically we’re paying hundreds of dollars (and sometimes thousands) for something that we really don’t need and doesn’t actually matter. So in reality my little mutt dog is boss as hell. Now that doesn’t mean that you’re a shit person if you get a purebred dog.

I’m not one to judge at all since the second dog to join my little family is in fact a purebred (we’ll learn about her later) however, in hindsight I’m able to realize that our obsession with purebreds and holding them at a higher standard is a little silly.

It can also be dangerous for animals if you are not doing a lot of research on the places you chose to buy your purebred animal from. Unfortunately the fact that people are willing to pay so much for a purebred animal has lead to some serious animal exploitation. You can see this especially in the rise of puppy mills.

If you’re unfamiliar with that term I encourage you to look out for my next animal post featuring the second fur ball to grace our little household, Lily, our purebred miniature dachshund.

So to sum it all up I’m glad Koga was a little oops baby! He’s unique to himself and there’s not another dog that looks just like him. I love that he’s his own man/dog J Finding him encouraged me to later look into the pitfalls of valuing purebreds over mutts and I think that gave me a better understanding of animals in general. I’m really glad Koga came into my family’s life!

Again don’t forget to comment below with your animal stories or any questions you might have on getting a purebred vs. getting a mutt dog! If I can’t answer your question I’m sure somebody here can 🙂 Let’s make this a fun place to talk about our pets.