As promised I will be playing through all the characters available on Enchanted in the Moonlight an otome game created by Voltage. I am currently playing it on my tablet. If you are unfamiliar with the game I highly recommend you check out my first post on the game Enchanted in the Moonlight: Shinra, which gives more information on pricing, initial thoughts, and a more in depth look at the storyline. For this post I will be doing just a brief recap of the summary.

Basically the storyline begins with “you” discovering that you are a super rare human born once every thousand years. Your special because your body gives power to ayakashi. Some ayakashi plan to obtain that power by eating you, others (seven to be specific) want to obtain that power by making a baby. In return for entering a contract with one of the seven ayakashi and having their child they promise to protect you from the ayakashi trying to kill and eat you. Seems legit. 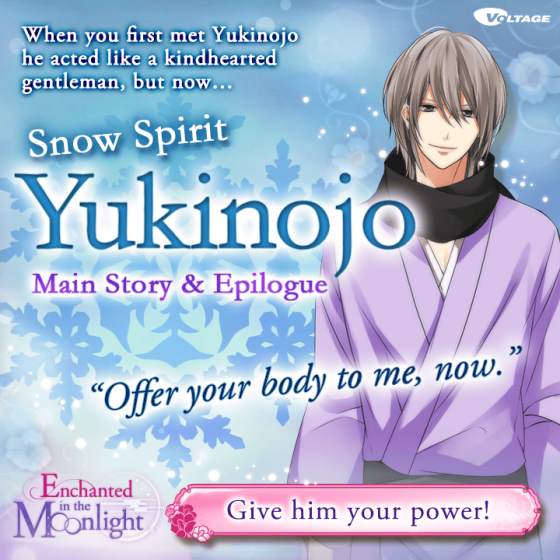 After playing through Shinra’s main route (which was great!) I decided to try out Yukinojo’s route. Uggggghhhh…. What. A. Letdown.

First, let’s discuss why I decided to try Yukinojo’s route. You see a little bit of him in Shinra’s route and he seemed like an interesting character there. He was nice and polite but you never wanted to make him angry. I thought there was probably a pretty great backstory with this character and I’m a sucker for a angsty backstory.

Sadly this didn’t pan out for me.

Yukinojo is a yukibito (snow spirit) and head of his clan. When you first enter the contract with him he is a total dick. There’s just no way around it. On the first night he tries to force himself on you, freezing your hands and feet when you try to fight back. Not cool. He only stops when you start to cry. Suddenly he seems to return to his nice personality that you original were attracted to and leaves.

The storyline basically continues with him having a Dr. Jekyll/Mr. Hyde complex and you desperately trying to get him to like you. Unfortunately every time you get close to even having a normal conversation with him he shuts you down with his douchebaggery. It was a real drag playing through this route for me I am telling you.

There was so much, “Why does he hate me?” “What can I do to break through this wall between us?” blah, blah, blah… Lame. The lead chick’s IQ literally drops 20 points during this storyline. It was a pain in the ass when it was time to make choices to progress the story because all three options suck and what I really wanted to do was punch Yukinojo in the nose and tell him to quit being bipolar.

….Cry me a fucking river Yukinojo!

Oh my god seriously! I’m sorry but if everybody turned into total dickhead’s after their first boyfriend/girlfriend broke up with the human species would die off. Get your life together Yukinojo. Or go marry another demon or something goddamn.

To top it off we later learn the full story from Yukinojo that makes him look even more like an idiot. Apparently he was studying in the human world when he met this girl. It was love at first sight, they held hands, things were pretty serious (eye roll). That’s when he decided to go back to the ayakashi world and get permission from his family/clan to marry her.

This is where things took a tragic turn. Yukinojo didn’t realize that time between the two worlds didn’t match up and humans age quicker. When Yukinojo finally comes back to the human world with news that they can get married he finds out that she’s old and has married another man. Instead of bringing her back to get married she gives him a violet and walks forever out of his life.

Yukinojo is devastated that she didn’t wait for him and decides that humans are incapable of loving somebody forever. What the hell? You’re an idiot.

In the end “you” are able to realize that the violet his old flame gave him was actually a message. Violets symbolize loyalty and his old girlfriend was telling him that even though she thought he was never coming back she always loved him. In Yukinojo’s defense how the hell was he supposed to get all that from a damn flower? He’s not a flower expert! She was right there. She couldn’t of been like, “Hey bro. Sorry I’m married but it’s been like 50 years and I thought you were either dead or forgot about me. Here’s this violet though because I want you to know I never stopped thinking about you.” Just saying.

The two endings are also huge let downs in my opinion. In the Good ending you take him on a date to a romantic movie and basically tell him that you’re okay with reminding him of his old girlfriend because you love him and he’s all like it’s cool girl I think of you as you now. Lame.

In the Happy ending he takes you to his old girlfriend’s grave and apologizes to her. He also thanks you because now he realizes that he was really the one in the wrong since he left for like 50 years and didn’t contact her once but expected her to be exactly where he left her. Thanks to you he can see his mistake and move on…. The End.

As you can tell I hated this route and thought it was boring. HOWEVER I am willing to admit that some people may enjoy this route. As hard as it is for me to wrap my brain around it I can see that some people might be into this type of character and find his storyline romantic.

Also if you’re not into more sexual charged moments this is your route for sure. Nothing really happens between the first attempted assault and the end of the story. I think at the end they might hold hands or hug… something little like that. Apparently I’m a pervert because I was bored with all of that but I get other people might dig it.

So if this sounds like your kind of story then I say go for it, otherwise pass on it and play Shinra 😀 I’m so glad I’m waiting to play through his extras especially after this route!

So let me know, have you played Enchanted in the Moonlight yet? What are your thoughts on Yukinojo? Does he sound like your kind of guy?

As for me I’m debating on playing either Chikage or Kyoga next 😀 Thoughts? 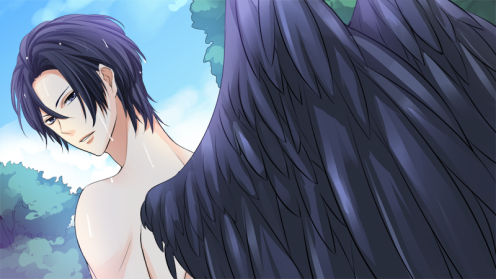 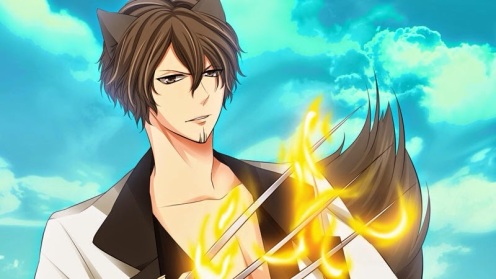 P.S. I don’t own ANY of the above pictures!

13 thoughts on “Enchanted in the Moonlight: Yukinojo”