Well we are back with more adventures with my new favorite otaku Tomoko Kuroki. In case you missed it I will be reviewing every current episode out of Watamote. Click here   to see my reaction to episode one if you haven’t gotten a chance to yet. Another reminder my review post are chalk full of spoilers so just know that going in!

Moving on episode two Watamote: Since I’m still not popular I’ll see my old friend continues highlighting Tomoko’s exceedingly embarrassing life. We open up t Tomoko getting a little hot and heavy listening to a Yandere Boy’s Verbal Abuse CD…. IS THAT EVEN A REAL THING?

* Quick Vocabulary Lesson: Yandere, “A Japanese term for a person who is initially very loving and gentle to someon (or at least innocent) before their devotion becomes destructive in nature, often through violence and/or brutality.” *

That scene was totally worth it for the look on my husband’s face hearing that! BAHAHAHA! He’s not an anime fan so it’s really hard to explain these things when he walks into stuff like this. He just shakes his head now and walks away… probably for the best. How am I suppose to explain that I’m watching a show about a maniacal otaku who gets off on Yandere Boy Verbal Abuse with out sounding like a crazy otaku myself?! 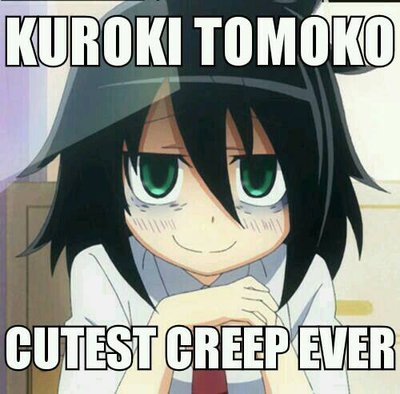 Tomoko’s fantasy hour is interrupted when she gets a phone (that’s shocking enough) and it turns out it’s from her middle school friend Yuu-chan. First off can I tell you how excited I am to hear Tomoko has at least had one friend! To top it off Yuu-chan wants to meet up later that weekend to hang out. EEEEEEHHHH! I thought things were finally looking up for my girl.

Of course this couldn’t last because Tomoko is insane. Which is really why we all love her so. She becomes convinced she needs to find things to brag about to show Yuu that her high school life has been a blast. When I heard her say that I was like, “Seriously Tomoko? What the heck can you possible brag about? The fact you finally said bye back to your teacher last week?”

I underestimated Tomoko’s resourcefulness. I apologize Tomoko, you are the queen of spinning a situation. She starts off her day by attempting some “cute anime girl eating”. I wasn’t aware that was a thing, but she gives it the college try. It doesn’t work. Then she freaks out when she realizes that she is going to have to work in partners for art and bails to the nurse’s room.

I wanted to bean Tomoko in the head at this point (lovingly of course). This would have been a chance for her to finally TALK to someone and she passes it up? Grrrrr! In her mind things work out when she realizes that there is a boy in the nurses room as well. She spins this into having, “slept with a boy” in the nurses room. Oh, Tomoko.

We also get to witness Tomoko’s honest and true hater nature when she bumps into the baseball team’s team manager. Tomoko is obviously jealous of all the time the manager gets to spend with the boys and takes it out on her. Of course only in her own mind.

She also stares at a girls panties on a stairwell (she claims for research purposes only, she wants to know what type of underwear a girl with a boyfriend would wear), has a very vivid fantasy during school that’s interrupted when a boy knocks her desk into her stomach, and finally is forced to work alone with a boy partner for art!

She’s disappointed because this boy is no looker, but of course is still super nervous. I was praying to the anime gods the whole time that she didn’t do anything really weird and it paid off. Not an awkward incident. She ends up taking a peak at the boy’s portrait he drew and is really stoked about it. We don’t see it a first, but whatever it is must be good because she asks the art teacher to make a photocopy of it when she turns them in.

Finally the big day comes where she is going to hang out with her friend and Tomoko is feeling confident! She has all kinds of things to brag about and the icing on the cake is her mysterious portrait. All that goes out the window when Yuu-chan shows up. Yuu-chan is suppose to be the super average plain jane, but of course shows up looking like a total cutie! I couldn’t help but think at this point, “WHY CRUEL WORLD?! Couldn’t you give my Tomoko a break?” 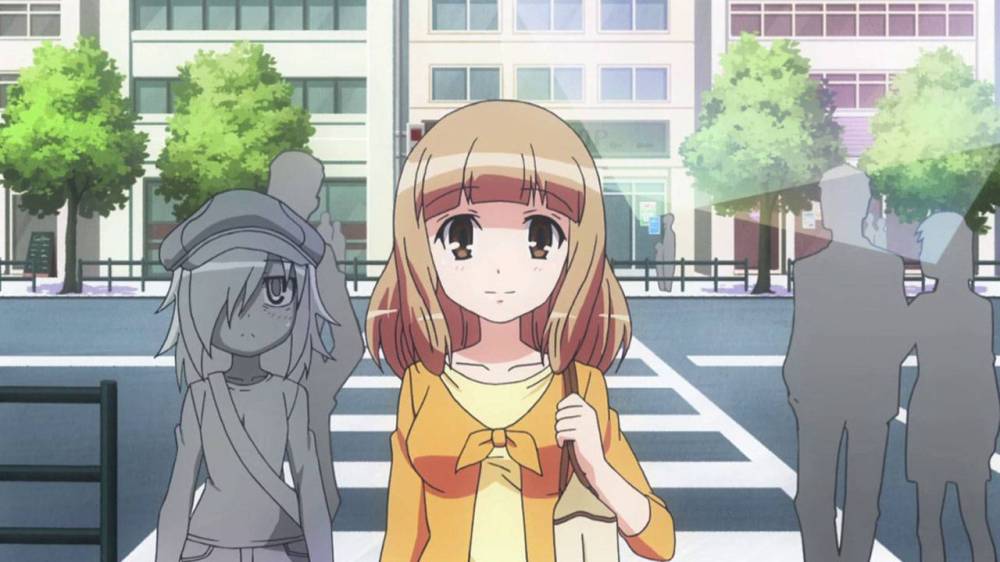 I actually ended up breathing a sigh of relief though. Yuu-chan ends up being Tomoko’s same old Yuu-chan despite her changes in looks. They end up having coffee, talking anime, and hitting up the arcade. It was great seeing Tomoko so happy! I was really rooting for her! In the end Tomoko and Yuu end up at the park swinging, talking, and this whole time Tomoko hasn’t done one insane thing. I was so proud >.</

Tomoko also resists telling Yuu about her great high school life when she notices that Yuu is kind of down. As Yuu goes to leave Tomoko makes the sweetest little speech ever ❤ She tells you that she thought high school was going to be the greatest time of her life, but it isn’t. Even though it isn’t though she’s trying every day and she wants Yuu-chan to do the same.

It was also completely wasted when Yuu-chan drops her bombshell… She tells Tomoko thanks for cheering her up and that she’s right. She doesn’t know why she was getting so down about her first fight with her boyfriend.

I thought I could console myself with the fact that we finally see the portrait and it is off Tomoko! However we quickly find out that the boy uses that look as his standard filler look because it is easiest to draw. Waaaahh! I hope Tomoko never finds out! She’s so happy thinking she’s some boy’s muse ❤ 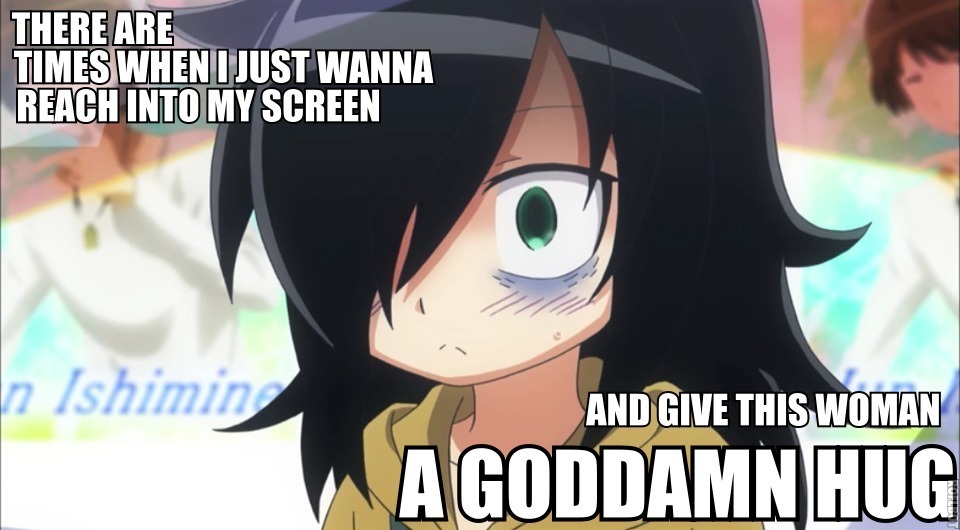 This episode delivered on the funny, but I hope next episode we get to see her brother again! I dig their dynamics.

Don’t forget to comment below with your thoughts on Watamote!

* I did not create these images *