My sister aka Modern Medusa suggested a while ago I do a review of Kill la Kill after she read my rant on Seven Deadly Sins. So here it finally is! I’ll admit that when I began the first episode I was kind of like, “What the fuck is happening.” I quickly got over that and realized that this show is totally amazing.

The premise of the show is that our leading lady Ryuko Matoi is looking for the person who murdered her father. She rocks one half a scissor sword and knows that the person with the other half is her father’s killer. This leads her to Honnouji Academy, an insane school where students of privilege are given special uniforms called Goku uniforms that enhance power and are divided up into groups. No stars being the lowest, then one stars, two stars, and the top dogs at three stars. Finally everything is under the command of Lady Satsuki, student council president. These uniforms are made of life fibers, which is why they are able to boost the power of the wearer. The higher the stars the more life fibers are imbedded into the uniform. Kamui uniforms are made entirely out of life fibers and only Lady Satsuki has one (although we don’t see it right away).

Initially Ryuko is easily defeated by a two-star boxing student but she is later able to find the Goku uniform her father left her. This uniform is a special kamui uniform, which means it is made entirely out of life fibers. The downside being it consumes her blood in order to enhance her power. It also means it is sentient, although only she can hear him. As the show continues we see Ryuko grow as a fighter as she continues to battle her way up to the top four students in order to have her finally showdown with Satsuki.

All Kinds of Spoilers Ahead

As the show continues we learn more about the price of life fibers and how they are actually planning to feed on all the humans. We also learn that all of this time Lady Satsuki is actually planning a revolt against her mother Ragyo Kiryuin. Ragyo is the leader of the Kiryuin Corporation and uses it to spread life fibers across the world. When the life fibers awaken they will feed on humankind.

Between the plot twists, fight scenes, and humor I could not get enough of this show!

I think what I really loved about the show is that it did have a unique plotline which made it really fun to watch. Also it was cool to watch such a girl driven anime, with really strong female leads. I think we have all noticed that there can be a slight trend in anime to have complete dumbasses as female leads. I have to admit though that as a whole I feel the shows are getting better about that. Another pretty amazing thing was the lack of romance. I’m a romantic, I really am, but it was nice to watch a girl lead anime that didn’t have some epic love triangle happening. It was completely focused on the fighting and ambitions of these two women, Ryuko and Satsuki.

While some may have a problem with the uniforms both Ryuko and Satsuki wear when they go into intense fighting mode I’m totally for it. I get that they can be taken as being fan servicey, but like Satsuki said while she was throwing down with Ryuko she’s able to win because she has no shame in how she looks while she’s fighting. She can fight without inhibitions. I thought that was pretty badass.

All the character were entertaining to watch as well. The relationship between Mako (Ryuko’s one friend at the academy) and Ryuko was hilarious. Mako’s character also did a great job of infusing some humor into the show when needed. In fact I literally live for the serious moments when she suddenly interrupts into some nonsense on how Ryuko is going to win. Her rants usually only partly convey what is acatually going on, but they are totally hilarious and always seem to work to fire Ryuko up! 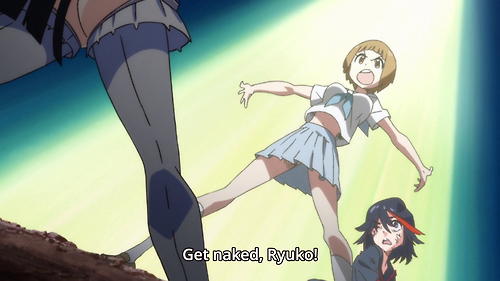 The final reason I love Kill la Kill has to be Ragyo Kiryuin. She sets the standard for ultimate evil villain. Not only does she sell out all of humanity to the life fibers, but she has absolutely no regard for any of her family members, including her children and husband. If anyone gets in the way of her plans she kills them without remorse or hesitation. She treats everyone around her as disposable pawns without the faintest hint of regret. Not only is she willing to use physical pain to get results, she is not above crossing sexual boundaries towards her own daughter to make sure she stays under her thumb. Seriously that scene between Satsuki and her in the bathtub was completely chilling. It really helped to showcase how Ragyo was completely disconnected from those around her.

To sum it up I love everything about this show. I love how Ryuko and Satsuki completely kick ass at every turn, how the animation style completely works for the show, how the humor that is inserted into it is spot on, and how Ragyo is the perfect villain.

What did you think of Kill la Kill? Comment below!

* As always the pictures come from the great interweb *